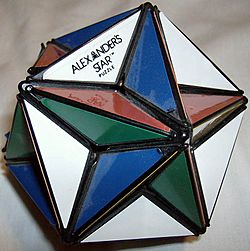 Alexander's Star in a solved state.

Alexander's Star is a puzzle similar to the Rubik's Cube, in the shape of a great dodecahedron.

The puzzle has 30 moving pieces, which rotate in star-shaped groups of five around its outermost vertices. The purpose of the puzzle is to rearrange the moving pieces so that each star is surrounded by five faces of the same color, and opposite stars are surrounded by the same color. This is equivalent to solving just the edges of a six-color Megaminx. The puzzle is solved when each pair of parallel planes is made up of only one colour. To see a plane, however, one has to look "past" the five pieces on top of it, all of which could/should have different colours than the plane being solved.

If considering the pentagonal regions as faces, like in the great dodecahedron represented by Schläfli symbol {5,5/2}, then the requirement is for all faces to be monochrome (same color) and for opposite faces to share the same color.

The puzzle does not turn smoothly, due to its unique design.

There are 30 edges, each of which can be flipped into two positions, giving a theoretical maximum of 30!×230 permutations. This value is not reached for the following reasons:

This gives a total of

All content from Kiddle encyclopedia articles (including the article images and facts) can be freely used under Attribution-ShareAlike license, unless stated otherwise. Cite this article:
Alexander's Star Facts for Kids. Kiddle Encyclopedia.