Alstonia constricta, commonly known as quinine bush or bitterbark, is an endemic Australian endemic shrub or small tree of the family Apocynaceae.

Alstonia constricta has an erect growth form. Growing to 12 m in height. The species is capable of producing adventitious shoots or ‘suckers’ from the root system and in this manner often forms thickets. Leaves are pubescent, narrow and lanceolate, from 5–20 cm in length. Flowers are white to cream, 2– 4 cm across. The bark has a corky textured and develops a grooved appearance in older plants. Alstonia constricta produces a white latex, and contains several alkaloids, several of which have medicinal potential, including reserpine. 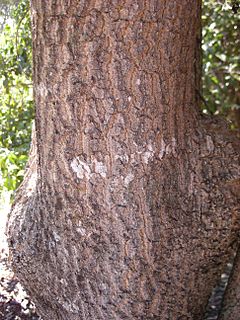 Alstonia constricta is the only subtropical member of the genus, and occurs in Eastern Australia from the Tropic of Capricorn southward to northern New South Wales. The species occurs in Eucalypt and Acacia woodlands, vine scrubs and gallery forests from humid coastal regions through to the semi-arid and arid inland. The field botanist Anders Bofeldt discovered an isolated population in the Shoalhaven River Gorge in southern New South Wales.

All content from Kiddle encyclopedia articles (including the article images and facts) can be freely used under Attribution-ShareAlike license, unless stated otherwise. Cite this article:
Alstonia constricta Facts for Kids. Kiddle Encyclopedia.