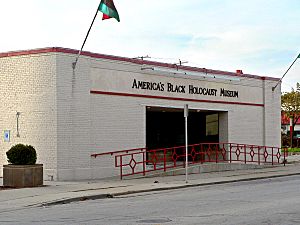 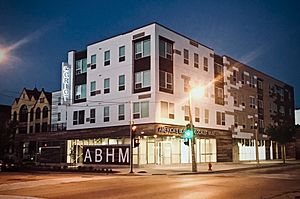 The new ABHM, which is scheduled to open fall 2019, is located on the ground floor of the newly built Griot building at 401 W. North Ave., Milwaukee.

America's Black Holocaust Museum (ABHM), located in Milwaukee, Wisconsin, is a memorial museum dedicated to the history of the Black Holocaust in America. It was founded in 1988 by James Cameron, who became well known to have survived a lynching.

The Griot Building was named for Cameron; "griot" is a West African term for an oral historian and news-bringer.

Cameron died in 2006. In 2008, the museum's board of directors announced that the museum would be closed temporarily because of reduced funding during the 2008 Great Recession. The 501(c)3 nonprofit Dr. James Cameron Legacy Foundation was created in 2012 to continue the legacy and vision of Dr. Cameron. In 2012, the Foundation re-opened ABHM as a 3200+ page virtual museum at www.abhmuseum.org.

In 2016, the Foundation began planning to return the museum to a new home. The new physical museum, located on the ground floor of the Griot building at 401 W. North Avenue in Milwaukee's historic Bronzeville neighborhood, is now scheduled to open in Fall 2019. The exact date of its Grand Opening was to be announced on their website.

After surviving a lynching at age 16 in which two companions died, and subsequently spending five years in prison, James Cameron was determined to do something important with the rest of his life. He got an education, worked hard, raised five children, and spent his life studying the African-American experience in the United States. He worked in civil rights, wrote independent articles, pamphlets and a memoir called A Time of Terror: A Survivor's Story). Cameron also amassed a large collection of materials and artifacts related to African-American history.

After retirement, Cameron and his wife visited Yad Vashem, the Holocaust memorial museum in Israel. He thought that museum's focus on the personal history of individuals and their stories led to a better understanding of the reality of the Holocaust. Then living in Milwaukee, Wisconsin, in 1988 he founded his museum with the help of philanthropist Daniel Bader, having collected materials on the African-American experience in the US for many years.

ABHM's facility, located in Milwaukee, is the only memorial and museum that interprets the African American experience in the United States as an ongoing holocaust (series of mass atrocities) from the time of captivity in Africa to the present day. The museum examines the tragic legacies of slavery and promotes racial repair, reconciliation, and healing through developing awareness and empathy.

Cameron died in 2006; in 2008, the museum's board of directors announced that the museum would be closed temporarily because of financial problems. The original museum was demolished in early 2017. The site, including the former Garfield Avenue School, was redeveloped as the Historic Garfield School Redevelopment Program.

On April 4, 2017, the developers broke ground on a new building called The Griot on the footprint of the original museum. The new museum is located on the ground floor of the Griot and was scheduled to open in 2019.

A new ABHM was established as a "virtual museum" by ABHM's Board of Directors, after the bricks-and-mortar museum closed. The new format came online as a virtual museum on February 25, 2012, in celebration of Cameron's birthday and Black History Month.

The online museum is operated by the nonprofit Dr. James Cameron Legacy Foundation Inc. The virtual museum attracts 5 million visitors per year from over 200 countries. The "online" experience complements the "onsite" experience by recounting many of the seldom-told and untold stories of both tragedy and triumph, through short texts, pictures, videos, documents and links to further reading and other resources.

While there is also a Black Holocaust memorial in Savannah, Georgia, the ABHM facility serves as a center for education and scholarship related to the Black Holocaust and as a supportive forum for sharing thoughts about race and racism in America.

Exposing visitors to historical aspects of African-American cultural identity is achieved through educational exhibits, special programming, and guided tours about seven distinct historic eras. These eras are also interpreted in the Virtual Museum:

ABHM welcomes visitors of all races and backgrounds, and encourages community understanding of the nation's history of racism, prejudice, social change and cross-cultural understanding.

All content from Kiddle encyclopedia articles (including the article images and facts) can be freely used under Attribution-ShareAlike license, unless stated otherwise. Cite this article:
America's Black Holocaust Museum Facts for Kids. Kiddle Encyclopedia.