Arthur's Teacher Trouble is a book in the Arthur series, released in 1986. It was written by Marc Brown and published by Little, Brown and Company and The Living Books Company.

On the first day of school, Arthur and his classmates are given homework by Mr. Ratburn, leaving them distraught. Later, the principal, Mr. Haney, announces that there will be a Spellathon in the coming weeks. One day, Mr. Ratburn tells the class to study hard for a test to see who will qualify as representatives for the Spellathon. Eventually, Arthur and The Brain end up being chosen and are given lists of words to study. On the day of the Spellathon, the representatives of each class are eliminated one by one until Arthur is the only one left. He manages to win the trophy after spelling "Preparation" correctly. In the end, Mr. Ratburn announces to the audience that he will be teaching Kindergarten, much to D.W.'s dismay. 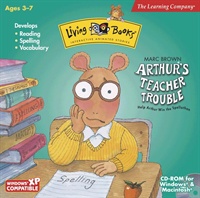 The title was also adapted into two television episodes in the Arthur TV series. They were titled as "Arthur and the Real Mr. Ratburn" and "Arthur's Spelling Trubble." The episodes aired together on October 8, 1996. VHS releases of "Arthur and the Real Mr. Ratburn" change the title card to "Arthur's Teacher Trouble" to reference the original book.

All content from Kiddle encyclopedia articles (including the article images and facts) can be freely used under Attribution-ShareAlike license, unless stated otherwise. Cite this article:
Arthur's Teacher Trouble Facts for Kids. Kiddle Encyclopedia.