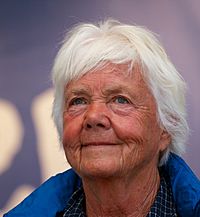 Astrid Nøklebye Heiberg (14 April 1936 – 2 April 2020) was a Norwegian politician. She was a member of the Conservative Party. She was the state secretary to the Minister of Social Affairs from 1981 to 1985, and Minister of Administration and Consumer Affairs in 1986.

She was also appointed as State Secretary in the Ministry of Health and Care Services, resigning in 2016. In 2018, she was once again elected to the Norwegian Parliament.

All content from Kiddle encyclopedia articles (including the article images and facts) can be freely used under Attribution-ShareAlike license, unless stated otherwise. Cite this article:
Astrid Nøklebye Heiberg Facts for Kids. Kiddle Encyclopedia.