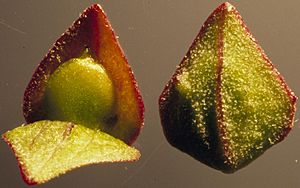 Although it is commonly asserted that Atriplex patula has been naturalized in North America only since the eighteenth century, seeds ascribed to this species occur on the west coast of North America in buried marsh deposits that predate European contact.,

Atriplex patula commonly grows along roads and waste sites. It has a wide range, including semi-arid deserts and coastal areas in Asia, North America, Europe, and Africa. It grows to be between 50 and 80 cm tall. The branches extend outwards from the stem with rhomboid leaves and separated clusters of flowers. Atriplex patula accumulates salt from the environment in its tissues. Unlike other Atriplex species, A. patula does not have notable salt bladders to excrete salt onto the leaves.

Atriplex patula has been proven to be effective in lowering salt content in soils when planted in areas with high road salt contamination.

All content from Kiddle encyclopedia articles (including the article images and facts) can be freely used under Attribution-ShareAlike license, unless stated otherwise. Cite this article:
Atriplex patula Facts for Kids. Kiddle Encyclopedia.