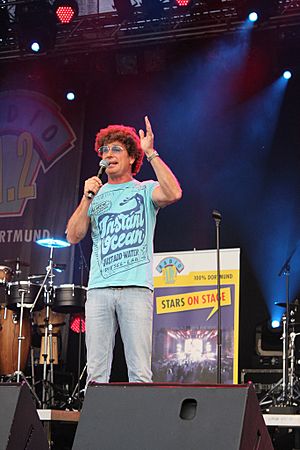 The figure "Atze Schröder" was born on 27 September 1965 in the German town Essen.

Biography of the comedian

In public, he always acts as his pseudonym "Atze Schröder". Some sources report Emsdetten as his place of birth. He was suing a German newspaper and the German Wikipedia after publishing his real name Hubertus Albers.

All content from Kiddle encyclopedia articles (including the article images and facts) can be freely used under Attribution-ShareAlike license, unless stated otherwise. Cite this article:
Atze Schröder Facts for Kids. Kiddle Encyclopedia.