Australian Centre for the Moving Image

The Australian Centre for the Moving Image (ACMI), at Federation Square, Melbourne, is Australia's national museum of film, video games, digital culture and art. During the 2015–16 financial year, 1.45 million people visited ACMI, the second-highest attendance of any gallery or museum in Australia, and the most visited moving image museum in the world. In May 2019, ACMI closed to the public to begin a $40 million redevelopment.

Beginnings in the State Film Centre

ACMI started life as the State Film Centre of Victoria in 1946.

In the 1950s, the State Film Centre was involved in producing a number of projects for television, then a new medium in Australia. It also played a role as an archive of Australian films, such as The Sentimental Bloke (1919) and On Our Selection (1920).

During the 1960s, the State Film Centre provided advice on film treatments, production, scripts and distribution outlets to local filmmakers. In 1969, the centre assumed management of the newly constructed State Film Theatre, providing a facility for exhibiting material not screened in commercial cinemas.

In the 1970s, the centre began acquiring examples of student films as well as those made by the newly vibrant Australian film industry, such as Homesdale (1971) by Peter Weir, Stork (1971) and Alvin Purple (1973) by Tim Burstall, and The Devil's Playground (1976) by Fred Schepisi.

In 1988, the State Film Centre Education Program was set up. The program provided screenings for Victorian Certificate of Education students, based on core texts, and in-service days for their teachers.

In 1993, a Victorian state government report reaffirmed the viability of a proposal for an Australian Centre for the Moving Image. In July 1997, following an open, international and two-stage design competition, Lab Architecture Studio (based in London at the time), in association with their joint venture partners, Bates Smart architects, was announced as the winner. Federation Square was to be a new civic space, built above the Jolimont railyards, to mark the celebration of Australia's Centenary of Federation. 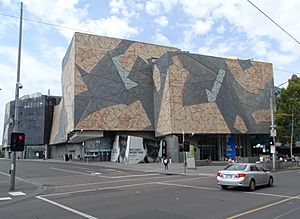 Flinders Street entrance to the Australian Centre for the Moving Image

In September 2009, the Australian Mediatheque and the Screen Worlds gallery opened. The Screen Worlds exhibition was opened by Cate Blanchett, who loaned her Oscar for best supporting actress for her part as Katharine Hepburn in The Aviator. Screen Worlds: The Story of Film, Television and Digital Culture is a free and permanent exhibition space constructed to educate the public about the moving image, a museum about moving pictures. The Mediatheque is a partnership with the National Film and Sound Archive (NFSA), which provides a space with 12 viewing booths where people can drop in and watch films, television clips, and new media and artworks from the NFSA and ACMI collections.

From 1992, John J. Smithies was Director of the State Film Centre of Victoria, until its merger with Film Victoria in 1997 formed Cinemedia. At Cinemedia, Smithies was Deputy Director, with prime responsibility for developing the Australian Centre for the Moving Image. He became the first director and CEO of ACMI in March 2002. He was responsible for opening the new public facilities in October 2002. After a period of turmoil, with the organisation over budget, Smithies left ACMI in 2004, and later said the facility had been forced to open while "under-funded" by the Victorian Government.

Tony Sweeney was appointed director and CEO of ACMI in 2005. Before his move to Australia, he had been the Deputy Director of the National Museum of Photography, Film & Television (UK), and focused on developing the Museum's brand profile and content strategies. He directed the Museum's Imaging Frontiers masterplan re-development, which generated record visitor numbers and international critical acclaim. The Museum is now seen as one of the leading international centres for culture and learning of its kind in the world. At ACMI he oversaw record organisational growth, performance and visitation, and a prolonged period of sustained success and achievement. Having spent ten years in the role, Sweeney resigned in order to return to his family in Britain.

Katrina Sedgwick took up the position in February 2015.

The screen gallery, renamed Gallery 1 when Gallery 2 was introduced in 2009, was built along the entire length of what was previously Princes Bridge railway station. It is a subterranean gallery for experimentation with the moving image. Video art, installations, interactive, sound art, net art and screen related objects are all regularly exhibited in this space.

With the exception of a dance work that formed part of the Melbourne International Arts Festival, Gallery 1 is usually either hosting an exhibition, or installing the next one. The exhibitions alternate between in-house and touring, and between free and ticketed.

Open from 18 September 2009, Gallery 2 is a smaller, more flexible gallery than Gallery 1.

ACMI has two main cinemas that are equipped to play every film, video and digital video format, with the most extensive projection facilities in the southern hemisphere. THX certified sound systems allow high quality attention to acoustics. Cinema 1 seats 168, and Cinema 2 seats 390.

In ACMI's Studios, Public Programs take place, such as A Moon Safari by Steam Bicycle and Kaleidoscope! Kids Animation.

Studio 1 is a production and educational amphitheatre which can accommodate everything from multimedia performances to television broadcasts, and is equipped with video projection, video conferencing, web casting and online facilities.

ACMI also houses a digital studio for hands-on workshops and production programs. Participants can access the technology, and develop the skills, to produce their own moving image work.

The ACMI Shop, located on the entry level next to the Tickets & Information Desk, stocks exhibition catalogues, books, DVDs, toys, cards and gifts.

ACMI X is a 2,000sqm office space that brings curators, programmers, producers and administrators together in a 60-seat co-working space dedicated to the creative industries. 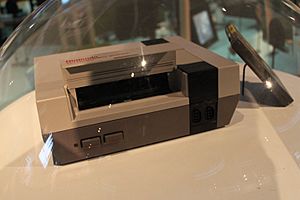 Some of the games on display in Screen Worlds.

The Screen Worlds exhibition hosted a number of 'Immersive Experiences'(interactive displays), including Timeslice (inspired by The Matrix), Ty the Tasmanian Tiger Zoetrope, The Faulty Fandangle (created by Oscar®-nominated Anthony Lucas), an installation by Anthony McCall, and many more.

Screen Worlds closed on April 22, 2019 to allow for redevelopment.

The Video Garden was an outdoor gallery that led people from the Flinders Street side of the building to the main entrance. Exhibitions included Random Encounters, Gooey by the Lycette Bros, and Blast Off.

The Memory Grid was a display allowing access to over 100 hours of film that were recorded by ordinary Australians, independent filmmakers, students, community-based practitioners and participants in ACMI hands-on production workshops. Much of the content in the Memory Grid had either never been displayed outside, or had been displayed only once on community television. Further, the Memory Grid contained a large collection of animated and interactive works, and actively accepted work from the public for display.

Screen It is a yearly competition for primary and secondary school students with a love of filmmaking hosted by ACMI. Screen It has 6 categories: Primary Live Action, Primary Animation, Primary Videogame, Secondary Live Action, Secondary Animation and Secondary Videogame. Each year there is a theme the films must be based on, past themes including Change (2015) and Reflection (2014). Usually around November or December there is a Red Carpet Awards Gala for the finalists in which they announce winners and the next year's theme. The competition was cancelled after 2019's event, with ACMI citing a "[transformation] into a brand new global museum".

The Games Lab was ACMI's display area for interactive video games. It celebrated the past, present and future of games and promoted this popular form of the moving image as a reflection of Australian culture.

The Games Lab exhibited the Best of the Independent Games Festival for 2005, 2006 and 2007. In early 2007, Hits of the 80s profiled Melbourne's Beam Software and the secret history of Australia's place in the rise and rise of the video game. In 2005 an exhibition was dedicated to Sonic the Hedgehog called Sonic the Hedgehog: Icon of our Times.

The Games Lab was incorporated into the Screen Worlds exhibition space.

ACMI has a strong online presence, with regular updates being made to the ACMI website and a dedicated section for blogs, podcasts, videos and news. ACMI also has a number of online projects which encourage user-generated content. These sites include 15 Second Place, Generator and the Educators Lounge.

ACMI have increased their touring program over the past few years. Beginning with Mary and Max, which toured regional Victoria, ACMI then followed by showing the 2011 Best of the Independent Games Festival in Sydney and Brisbane. Shaun Tan's The Lost Thing: From Book To Film and War Pictures: Australians at the Cinema 1914–1918. ACMI's first original exhibition in the Melbourne Winter Masterpieces series, Game Masters: The Exhibition.

DreamWorks Animation: The Exhibition, which includes over 400 works of art, including original hand-drawn character sketches, 3D marquettes of locations and characters, storyboards, interactive displays that allow you to play with DreamWorks animation technology, and a 180 degree film display that takes viewers on a journey from script pages and drawings through to a fully rendered 3D world.

Del Kathryn Barton: The Nightingale and the Rose

Featuring a selection of Barton's evocative artworks alongside a screening of the film, stunning never-before-seen handmade props, and material from the production archives, Del Kathryn Barton: The Nightingale and the Rose reveals the extraordinary workings behind this captivating animated picture.

the first Australian exhibition celebrating the achievements of women working in the games industry. Whether it's making commercial hits or indie titles, these women know games, contributing as directors, programmers, developers, artists, writers, producers and designers. Inside the exhibition you can play everything from platformers, RPGs and digital board games to graphical adventures and puzzlers, there's something for everyone, at every skill level.

Alongside the fun, Code Breakers ponders important questions in the post-Gamergate landscape: How do women carve a path in an industry that has historically been hostile towards them? How do we encourage diversity? What does a more inclusive games industry look like? Each maker reflects on the sometimes challenging journey they've made in this male-dominated industry, revealing the human stories behind their games.

Cleverman: The Exhibition celebrates the groundbreaking Australian Indigenous superhero television series Cleverman using props, original sketches and rich audio and video content to provide unique insights into how this incredible series was made.

The exhibition explores First Nations storytelling, language and creativity, and invites visitors to listen-first and immerse themselves in a powerful and contemporary expression of Indigenous origin stories.

Visitors are welcomed into the Bindawu Spirit listening space to hear the key Dreaming stories that underpin Cleverman. They can explore original props, costumes and character designs by Peter Jackson's WETA Workshop, interviews with the cast and crew and original artwork from the comic book.

All content from Kiddle encyclopedia articles (including the article images and facts) can be freely used under Attribution-ShareAlike license, unless stated otherwise. Cite this article:
Australian Centre for the Moving Image Facts for Kids. Kiddle Encyclopedia.