Barracks Square or the Militia Barracks is a square Macclesfield, England that was first developed in the 1850s as a military establishment.

The need for the construction of barracks followed the raising of the 2nd Royal Cheshire Militia, recruiting in the eastern part of the county (the existing 1st Cheshire Militia was based at Chester). In October 1857 the Cheshire Quarter Sessions passed a resolution that "...barracks for the 2nd Regiment of Cheshire Militia be erected in some part of the eastern division of the county." Initially, Stockport was favoured, but a decision to purchase land in Macclesfield was made in January 1858, against the objections of the Mayor and Corporation of the town.

The barracks, consisting of married quarters, CO's quarters and the armoury were for the use of the permanent staff of the regiment. 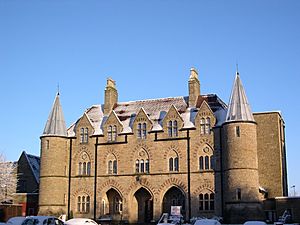 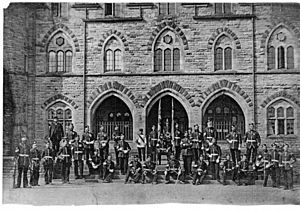 All content from Kiddle encyclopedia articles (including the article images and facts) can be freely used under Attribution-ShareAlike license, unless stated otherwise. Cite this article:
Barracks Square, Macclesfield, England Facts for Kids. Kiddle Encyclopedia.