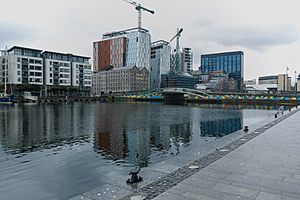 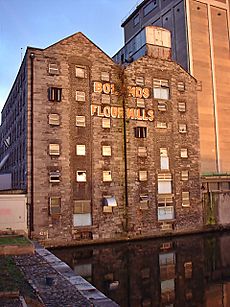 Boland's Mill was located on the Grand Canal Dock in Dublin, Ireland on Ringsend Road between the inner basin of Grand Canal Dock and Barrow Street. As of 2019, it is undergoing a €150 million reconstruction to become Bolands Quay, a development of new residences and commercial, retail, and civic spaces.

The mill site includes a number of buildings. There are two six-storey stone warehouse buildings dating from the 1830s, and others on Barrow Street dating from the 1870s. The majority of the complex consisted of concrete silos built between the 1940s and 1960s. The mill stopped production in 2001 and the site had been derelict since then. Within the complex of buildings, the older 19th century stone block buildings facing onto Ringsend Road and onto Grand Canal Dock together with two terraced houses on Barrow street are listed as protected buildings by Dublin City Council. The taller concrete silos on the site were not protected structures, and were demolished during the construction in 2017-2018.

The site is in an area dubbed "Silicon Docks" (a reference to Silicon Valley) as it has become location for high-tech multinationals such as Google and Facebook.

Since 2015, the site is undergoing a €150 million reconstruction that will be known as 'Bolands Quay', accommodating new residences, commercial, retail, and civic spaces.

On 2 December 2014 a site notice was posted which indicated plans for the site. This notice included details of:

The Boland's Mill site initially had planning permission for an office, residential and retail/hotel redevelopment granted by the Dublin Docklands Development Authority (under Section 25 of the Dublin Docklands Development Authority Act, 1997). The site was sold to Versus Limited/Benton Properties for 42 million euros in 2004 and had planned to develop 67 apartments, two houses, 13,284 square metres (142,990 sq ft) of office space, as well as retail and leisure facilities on the site.

The property collapsed in value by a significant 84 percent following the property market bust, from €61m in 2007 to €9.9m in 2009, according to accounts filed by Versus with the Companies Office. Versus owed parent company Benton €15.8m.

All content from Kiddle encyclopedia articles (including the article images and facts) can be freely used under Attribution-ShareAlike license, unless stated otherwise. Cite this article:
Boland's Mill Facts for Kids. Kiddle Encyclopedia.