Boys' Own facts for kids

Kids Encyclopedia Facts
This page is about the collective series of boys' magazines with similar titles. For the British magazine published from 1879 to 1967, see Boy's Own Paper. For the record label, see Junior Boy's Own. 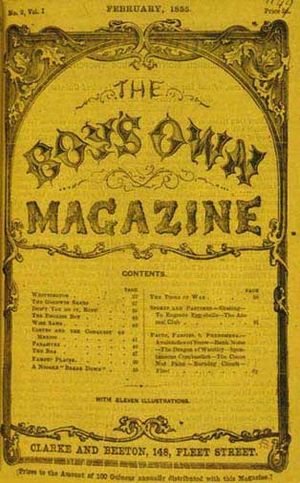 Beeton's Boy's Own Magazine, published in the UK from 1855 to 1890, was the first and most influential boys' magazine.

Boys' Own or Boy's Own or Boys Own, is the title of a varying series of similarly titled magazines, story papers, and newsletters published at various times and by various publishers, in the United Kingdom and the United States, from the mid-19th century to the mid-20th century, for preteen and teenage boys.

The contents of the various magazine titles consisted largely of boyish and manly fiction and adventure tales. The magazines could also contain nonfiction stories and adventures, nonfiction and how-to instructional articles, and articles similar to scouting or Boy Scout activities. Contents also included articles on sports, articles on boys school life, and also detective fiction, Western fiction, science fiction, and other genres of interest to boys.

All content from Kiddle encyclopedia articles (including the article images and facts) can be freely used under Attribution-ShareAlike license, unless stated otherwise. Cite this article:
Boys' Own Facts for Kids. Kiddle Encyclopedia.