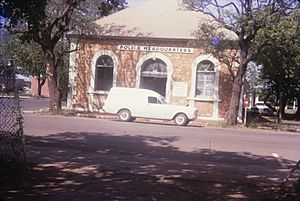 Brown's Mart is an historic theatre located in Darwin in the Northern Territory of Australia, on the corner of Smith Street and Harry Chan Avenue.

Brown's Mart is the oldest building in the city centre being built in 1885 as a Mining Exchange by Mr Brown who was a trader and a Mayor of Darwin. John George Knight, Government Secretary and Architect who was also responsible for the design of the Town hall, Residency, Courthouse, Police Station and the Gaol at Fannie Bay.

Brown's Mart is of simple rectangular plan typical of early colonial buildings including semi circular arches over the front windows and doorway and simple decorations around the openings. Over the years it has been used in commerce, storage, as a shipping and insurance agency, mining exchange, auctions, meetings of local organisations, banking, defence, Naval workshop, law, policing and the arts. In August 1972 Brown's Mart Theatre by Ken Conway, Darwin's first full-time community arts officer with the help of an $8,000 grant from the Australian Council for the Arts. This evolved into Brown's Mart Community Arts Project encouraging and initiating community based arts project which can be self-sufficient and self-generating. Brown's Mart has withstood the cyclones of 1897, 1937 and 1974, Cyclone Marcus 2018, the wartime bombing in 1942 and 1943.

It was listed on the Northern Territory Heritage Register on 20 March 1996 and on the defunct Register of the National Estate on 21 October 1980.

All content from Kiddle encyclopedia articles (including the article images and facts) can be freely used under Attribution-ShareAlike license, unless stated otherwise. Cite this article:
Brown's Mart Facts for Kids. Kiddle Encyclopedia.