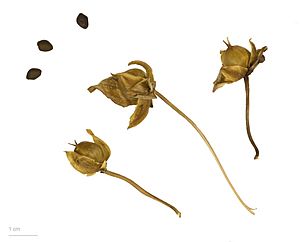 It is an herbaceous perennial that twines around other plants, in a counter-clockwise direction, to a height of up to 2–4 m, rarely 5 m. The pale matte green leaves are arranged spirally, simple, pointed at the tip and arrowhead shaped, 5–10 cm long and 3–7 cm broad.

The flowers are white, or pale pink with five darker stripes, produced from late spring to the end of summer. In the bud, they are covered by large bracts which remain but scarcely overlap and do not cover the sepals of the open flower. The open flowers are trumpet-shaped, 3–7 cm diameter, white, or pale pink with white stripes. After flowering the fruit develops as an almost spherical capsule 1 cm diameter containing two to four large, black seeds that are shaped like quartered oranges. The seeds disperse and thrive in fields, borders, roadsides and open woods.

Several regional subspecies have been described, but they are not considered distinct by all authorities:

Other vernacular names include greater bindweed, bearbind, hedge convolvulus, hooded bindweed, old man's nightcap, wild morning glory, bride's gown, wedlock (referring to the white gown-like flowers and the binding nature of the vine), white witches hat, belle of the ball. A common childhood pastime in the UK is to 'pop' the flowers from the sepals while chanting "Granny, granny — pop out of bed". 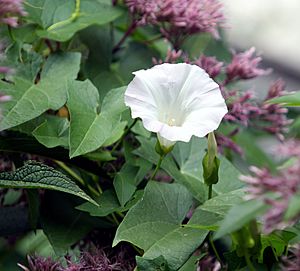 Calystegia sepium is a plant with showy white flowers. However, because of its quick growth, clinging vines and broad leaves, it can overwhelm and pull down cultivated plants including shrubs and small trees. It's aggressively self-seeding (seeds can remain viable as long as 30 years) and the success of its creeping rhizomes (they can be as long as 3–4 m) cause it to be a persistent weed and have led to its classification as a noxious weed.

All content from Kiddle encyclopedia articles (including the article images and facts) can be freely used under Attribution-ShareAlike license, unless stated otherwise. Cite this article:
Calystegia sepium Facts for Kids. Kiddle Encyclopedia.