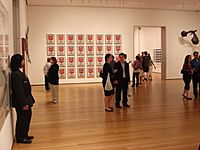 Campbell's Soup Cans, which is sometimes referred to as 32 Campbell's Soup Cans, is a work of art produced between November 1961 and March or April 1962 by Andy Warhol. It is made up of thirty-two canvases, each measuring 20 inches (51 cm) in height × 16 inches (41 cm). Each are of a painting of a Campbell's Soup can—one of each of the canned soup versions the company offered at the time. It is one of the most important art pieces of pop art in the United States.

All content from Kiddle encyclopedia articles (including the article images and facts) can be freely used under Attribution-ShareAlike license, unless stated otherwise. Cite this article:
Campbell's Soup Cans Facts for Kids. Kiddle Encyclopedia.