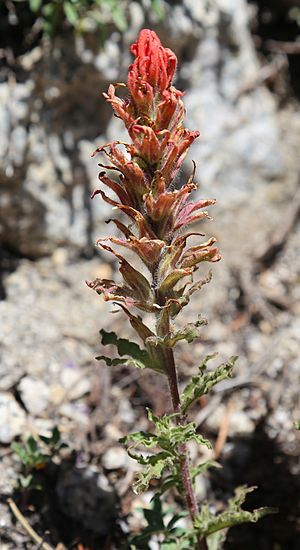 It is native to the western United States. It is a short perennial with sticky, wavy-edged leaves. It bears bright, showy paintbrush-shaped inflorescences of small red to yellowish-red tubular flowers.

Like other species of Indian paintbrush, it is a root parasite. Although it can survive without parasitizing other plants, individuals which take a host grow faster and larger.

There are five subspecies. They are variable in appearance but distinguishable from other Castilleja species by the wavy margins and stickiness of the leaves.

All content from Kiddle encyclopedia articles (including the article images and facts) can be freely used under Attribution-ShareAlike license, unless stated otherwise. Cite this article:
Castilleja applegatei Facts for Kids. Kiddle Encyclopedia.