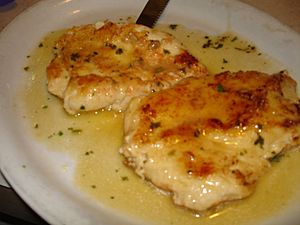 Chicken Française (or Chicken Francese) is an Italian-American dish of flour-dredged, egg-dipped, sautéed chicken cutlets with a lemon-butter and white wine sauce. The dish is popular in the region surrounding Rochester, New York, where it is known as Chicken French, to the point that some have suggested the dish be called Chicken Rochester. When Italian immigrants arrived in Rochester, they brought their recipes with them, including veal francese, but they substituted chicken for the more expensive veal. Another source says that Veal Francese had been popular in the region since the 1950s, but when consumers boycotted veal in the 1970s, area chefs like James Cianciola successfully substituted chicken. Cianciola credits chefs Tony Mammano and Joe Cairo with bringing the dish from New York City.

Despite being such a well-known dish in Italian-American culture, francese is not a classical dish or sauce. There are no written recipes that mark the origin of this dish.

All content from Kiddle encyclopedia articles (including the article images and facts) can be freely used under Attribution-ShareAlike license, unless stated otherwise. Cite this article:
Chicken Française Facts for Kids. Kiddle Encyclopedia.