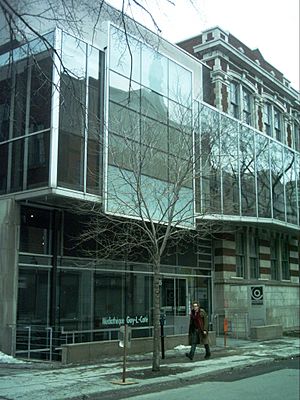 The Cinémathèque québécoise is a film conservatory in Montreal, Quebec, Canada. Its purpose is to preserve, document, film and television footage and related documents and artifacts for future use by the public. The Cinémathèque's collections include over 35,000 films from all eras and countries, 25,000 television programmes, 28,000 posters, 600,000 photos, 2,000 pieces of historical equipment, 15,000 scripts and production documents, 45,000 books, 3,000 magazine titles, thousands of files as well as objects, props and costumes. The conservatory also includes a film theatre which screens rarely seen film and video.

It is located at 355 De Maisonneuve Boulevard East, in the city's Quartier Latin. The Institut national de l'image et du son is located next door.

The Connaissance du cinéma, soon after renamed the Cinémathèque canadienne, was founded in 1963.

In 1971 the institution was renamed Cinémathèque québécoise.

The Cinémathèque complex was extensively redesigned from 1994 to 1997 by the architectural firm of Saucier + Perrotte. Awards for the design included the 1999 Governor General's Award for Architecture.

In 2017 the Cinémathèque québécoise collaborated with the Vancouver Cinematheque, the Toronto International Film Festival and Library and Archives Canada mounted a retrospective of 150 culturally significant films.

All content from Kiddle encyclopedia articles (including the article images and facts) can be freely used under Attribution-ShareAlike license, unless stated otherwise. Cite this article:
Cinémathèque québécoise Facts for Kids. Kiddle Encyclopedia.