Cogswell's Grant is a working farm and historic house museum in Essex, Massachusetts. It was the summer home of Bertram K. and Nina Fletcher Little, preeminent collectors of American decorative arts in the mid 20th century. Through her research and innumerable publications, Mrs. Little charted new areas of American folk art (which she preferred to call "country arts"), such as decorative painting, floor coverings, boxes, and New England pottery.

In 1937, the Littles purchased this farm, including its 18th-century farmhouse with views of the Essex River, as a family retreat and place to entertain. They named it Cogswell's Grant, after John Cogswell, who was the first English colonial owner of the property, which includes about 165 acres (67 ha) of land. They carefully restored the farmhouse, trying to preserve original 18th-century finishes and carefully documenting their work, and decorated from their extensive collection of artifacts. In more than 50 years of collecting, they sought works of strong, even quirky character, and in particular favored objects with their original finishes and New England histories. They decorated the house for visual delight rather than historical accuracy. The result is rich in atmosphere and crowded with collections of things—primitive paintings, redware, painted furniture, stacked Shaker boxes, weather vanes and decoys—that have since come to define the country look. 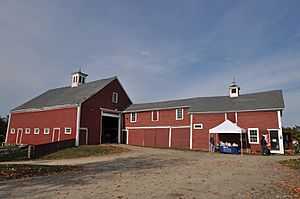 The 19th century barn; the rightmost portion is used for visitor facilities, while the balance is used for farm equipment and supplies.

All content from Kiddle encyclopedia articles (including the article images and facts) can be freely used under Attribution-ShareAlike license, unless stated otherwise. Cite this article:
Cogswell's Grant Facts for Kids. Kiddle Encyclopedia.