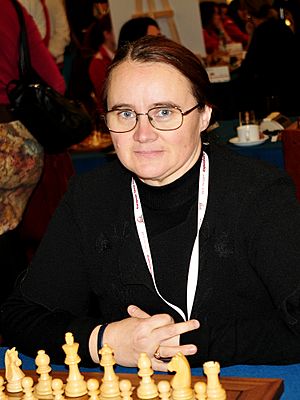 She had competed for the world championship several times, most recently the Women's World Chess Championship 2012 when she went out in the first round in an Armageddon game. In the season 2016/17 she played for Schachfreunde Deizisau in 2. Bundesliga Süd.

Foisor died of complications from pneumonia after several days in a coma at County Hospital of Timișoara, Romania, aged 49.

All content from Kiddle encyclopedia articles (including the article images and facts) can be freely used under Attribution-ShareAlike license, unless stated otherwise. Cite this article:
Cristina Adela Foișor Facts for Kids. Kiddle Encyclopedia.