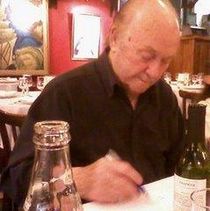 Délfor Amaranth Dicásolo, better known as Délfor (April 25, 1920 – September 13, 2013) was an Argentine actor, comedian, screenwriter, and artist. He was known for his radio work and comedic routines. His career has lasted for 57 years.

Dicásolo was born on April 25, 1920 in Chivilcoy, Buenos Aires, Argentina. His parents were from Naples, Italy. Dicásolo had two children. He lived in Buenos Aires with his family until his death in 2013. Dicásolo died on September 13, 2013 in his Buenos Aires home from natural causes, aged 93.

All content from Kiddle encyclopedia articles (including the article images and facts) can be freely used under Attribution-ShareAlike license, unless stated otherwise. Cite this article:
Délfor Dicásolo Facts for Kids. Kiddle Encyclopedia.