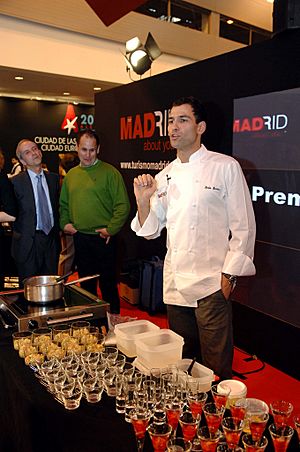 Darío Barrio Domínguez (1972 – 6 June 2014) was a Spanish television chef. He was best known for presenting Cuatro's Todos contra el chef for sixteen episodes from 2005 until 2006.

Barrio was born in Madrid and began cooking at the age of fourteen. After studying, he traveled to countries such as France, Switzerland, the United Kingdom, and the United States for thirteen years to cook.

Barrio died in a BASE jumping accident on 6 June 2014 in Segura de la Sierra, Jaén, aged 42. The act was meant to be a tribute to Álvaro Bultó, who died the same way in August 2013.

All content from Kiddle encyclopedia articles (including the article images and facts) can be freely used under Attribution-ShareAlike license, unless stated otherwise. Cite this article:
Darío Barrio Facts for Kids. Kiddle Encyclopedia.