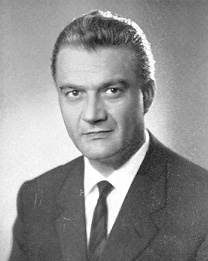 Emilio D'Amore (26 November 1915 – 21 October 2017) was an Italian writer, journalist, and politician. He was born in Montefalcione, Italy. He was first elected to the Chamber of Deputies in 1948 as a representative of the Monarchist National Party. D'Amore joined the Italian Democratic Party of Monarchist Unity (PDIUM) and won reelection in 1953. He served a final term in the Chamber of Deputies from 1963 to 1968, again as a member of the PDIUM.

D'Amore died in Avellino, Italy on 21 October 2017 of congestive heart failure at the age of 101.

All content from Kiddle encyclopedia articles (including the article images and facts) can be freely used under Attribution-ShareAlike license, unless stated otherwise. Cite this article:
Emilio D'Amore Facts for Kids. Kiddle Encyclopedia.