Eucalyptus extrica, commonly known as eastern tallerack, is a species of mallee that is endemic to Western Australia. It has smooth bark, lance-shaped adult leaves arranged in opposite pairs, flower buds in groups of three, whitish flowers and cylindrical to barrel-shaped fruit. 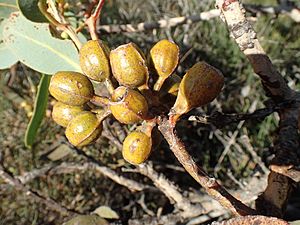 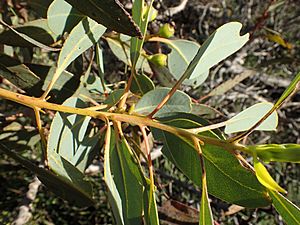 Tallerack (E. pleurocarpa) has a similar habit but has noticeably shorter, wider, glaucous leaves, glaucous buds and fruit. Intergrades between the two species have been recorded.

Eucalyptus extrica was first formally described in 2000 by Dean Nicolle from a specimen collected east of Condingup by Anthony Orchard, and the description was published in the journal Nuytsia. Nicolle wrote that the specific epithet is "from the Latin word extrico meaning "disentangled" or "free", in reference to this species having been confused with E. tetragona in the past. Ali Sharr wrote that extrica is a non-word in Latin, and that the past participle of the Latin extrico ("I disentangle" or "I free") is extricatus.

Eastern tallerack is found in coastal areas in the Goldfields-Esperance region of Western Australia between Esperance and Cape Arid where it grows in sandy soils over limestone.

This mallee is classified as "not threatened" by the Western Australian Government Department of Parks and Wildlife.

All content from Kiddle encyclopedia articles (including the article images and facts) can be freely used under Attribution-ShareAlike license, unless stated otherwise. Cite this article:
Eucalyptus extrica Facts for Kids. Kiddle Encyclopedia.