Eucalyptus gongylocarpa, commonly known as baarla, marble gum or desert gum, is a species of tree endemic to central Australia. It has smooth bark, lance-shaped to elliptical leaves arranged more or less in opposite pairs, flower buds in groups of seven, whitish flowers and more or less spherical fruit. 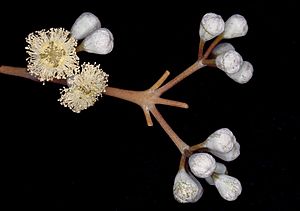 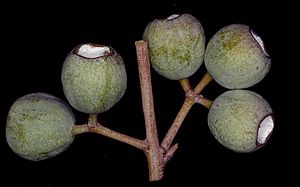 Eucalyptus gongylocarpa was first formally described in 1936 by William Blakely in Transactions and Proceedings of the Royal Society of South Australia from a specimen collected by Richard Helms in 1891. The specific epithet gongylocarpa is "from the Greek gongylos meaning 'round' and carpos meaning 'fruit', referring to its distinctively spherical fruits".

All content from Kiddle encyclopedia articles (including the article images and facts) can be freely used under Attribution-ShareAlike license, unless stated otherwise. Cite this article:
Eucalyptus gongylocarpa Facts for Kids. Kiddle Encyclopedia.