Eucalyptus lesouefii, commonly known as goldfields blackbutt, is a species of mallet or tree that is endemic to central Western Australia. It has rough, black bark on the lower trunk, smooth bark above, lance-shaped adult leaves, flower buds in groups of seven, creamy white flowers and cup-shaped fruit. 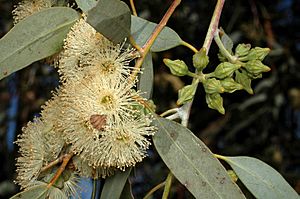 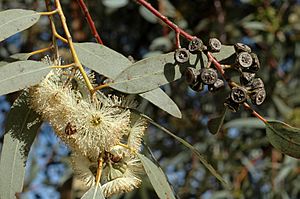 Eucalyptus lesouefii was first formally described in 1912 by Joseph Maiden from a specimen he collected near Kalgoorlie. The description was published in his book in his A Critical Revision of the Genus Eucalyptus. The specific epithet honours Albert Sherbourne Le Souef for his assistance to Maiden.

The goldfields blackbutt is found on flats and slopes, in alluvial areas and elsewhere, in the Coolgardie, Great Victoria Desert and Murchison biogeographic regions centred around Kalgoorlie, Western Australia. Eucalyptus lesouefii is generally found on sandy loam, and occasionally with clays or gravel soils.

The timber, useful as firewood, is light brown and has a high density. Trees are vulnerable to white ant infestation, which occupy individuals of all ages in its native habitat and reduce its utility. A record of it commonly occurring at Widgiemooltha was noted in the 1920s.

All content from Kiddle encyclopedia articles (including the article images and facts) can be freely used under Attribution-ShareAlike license, unless stated otherwise. Cite this article:
Eucalyptus lesouefii Facts for Kids. Kiddle Encyclopedia.