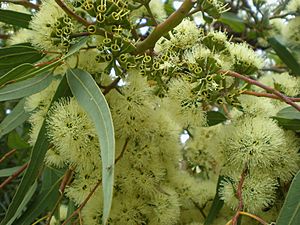 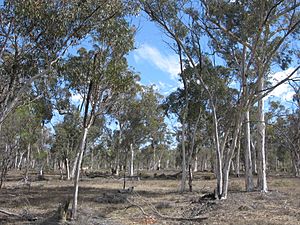 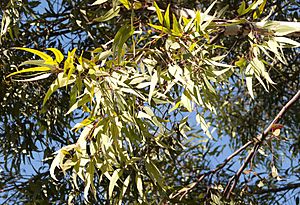 Eucalyptus wandoo, commonly known as wandoo, dooto, warrnt or wornt, is a small to medium-sized tree that is endemic to the southwest of Western Australia. It has smooth bark, lance-shaped adult leaves, flower buds in groups of nine to seventeen, white flowers and conical to cylindrical fruit. It is one of a number of similar Eucalyptus species known as wandoo.

Eucalyptus wandoo was first described in 1934 by William Faris Blakely in his book A Key to the Eucalypts. The specific epithet "wandoo" comes from the Noongar name for the tree.

In 1991, Ian Brooker and Stephen Hopper described two subspecies and the names have been accepted by the Australian Plant Census:

Wandoo occurs from Geraldton to the south coast, and from the west coast inland as far as Narembeen. It grows in loamy and stony soils, in undulating terrain. Subspecies pulverea is less common and occurs between Cataby and Morawa.

Both subspecies of E. wandoo are classified as "not threatened" by the Government of Western Australia Department of Parks and Wildlife. Decline of the habitat and crown decline of wandoo has been studied.

The wood of this species is extremely dense, and is used for a range of heavy duty construction purposes, including as railway sleepers and wood flooring. There was once an industry in the extraction of tannin from the bark and wood. These days the wood is not much available, as the wandoo forests are preserved for recreation and watershed protection. Wandoo is also famous for the honey produced from its nectar.

All content from Kiddle encyclopedia articles (including the article images and facts) can be freely used under Attribution-ShareAlike license, unless stated otherwise. Cite this article:
Eucalyptus wandoo Facts for Kids. Kiddle Encyclopedia.