The Explorers' Monument is a monument located in Esplanade Park in Fremantle, Western Australia. It is approximately six metres high, and consists of a head and shoulders statue of Maitland Brown, sitting on granite pedestals on a granite base inset with plaques honouring three explorers, Frederick Panter, James Harding and William Goldwyer. The monument was commissioned by George Julius Brockman, and the statue of Brown was sculpted by Pietro Porcelli. Lady Forrest unveiled the work in February 1913. Due to controversy about its presentation of settler/Aboriginal disputes it was altered in the 1990s.

Panter, Harding and Goldwyer were killed by Aboriginal people in 1864, while exploring in the Kimberley region of Western Australia. When the men failed to return, Brown was commissioned to lead the La Grange expedition, which searched for the whereabouts of the missing men. Brown's search party found the men dead, having been speared to death, two of them evidently in their sleep. Shortly afterwards, a number of Aboriginal people were killed by Brown's party in a highly controversial incident that was reported by Brown as a battle brought on by an Aboriginal ambush, but which has often since been characterised as a punitive massacre of Aboriginal people by white settlers.

One of the original plaques on the pedestal reads as follows:

The Aboriginal communities have long held that the Explorer's Monument was a racist work that presented a biased interpretation of the events at La Grange. In 1994, an attempt was made to redress this perceived bias by placing an additional plaque on the monument. The new plaque commemorates all Aboriginal people who died "during the invasion of their country", and reads as follows: 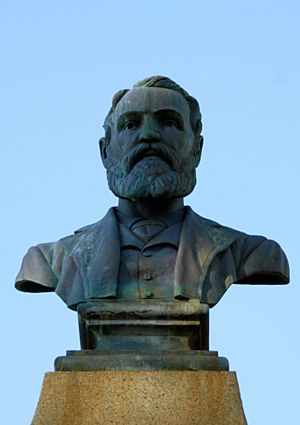 All content from Kiddle encyclopedia articles (including the article images and facts) can be freely used under Attribution-ShareAlike license, unless stated otherwise. Cite this article:
Explorers' Monument Facts for Kids. Kiddle Encyclopedia.