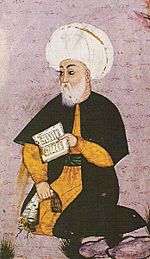 Fużūlī (فضولی) was the pen name of the poet Muhammad bin Suleyman (محمد بن سليمان) (c. 1483 – 1556). He is one of the greatest contributors to the Dîvân tradition of Turkish literature,

Fuzûlî wrote his collected poems (dîvân) in three different languages: Azerbaijani Turkish, Persian, and Arabic. Although his Turkish works are written in Azerbaijani, he knew both the Ottoman and the Chagatai Turkish literary traditions as well. He was also very able in mathematics and astronomy.

Fuzûlî was born around 1483 in what is now Iraq; he was probably born in either Karbalā’ or an-Najaf. Fuzûlî's ancestors had been of nomadic origin, but his family had long since settled in towns.

Fuzûlî was educated by his father—who was a mufti in the city of Al Hillah — and then by a teacher named Rahmetullah. It was during this time that he learned the Persian and Arabic languages in addition to his native Azerbaijani.

One of the few things that is known of Fuzûlî's life during this time is how he arrived at his pen name. In the introduction to his collected Persian poems, he says: "In the early days when I was just beginning to write poetry, every few days I would set my heart on a particular pen name and then after a time change it for another because someone showed up who shared the same name". Eventually, he decided upon the Arabic word fuzûlî—which literally means "impertinent, improper, unnecessary"—because he "knew that this title would not be acceptable to anyone else". Despite the name's pejorative meaning, however, it contains a double meaning—what is called tevriyye (توريه) in Ottoman Divan poetry — as Fuzûlî himself explains: "I was possessed of all the arts and sciences and found a pen name that also implies this sense since in the dictionary fuzûl (ﻓﻀﻮل) is given as a plural of fazl (ﻓﻀﻞ; 'learning') and has the same rhythm as ‘ulûm (ﻋﻠﻮم; 'sciences') and fünûn (ﻓﻨﻮن; 'arts')".

In 1534, the Ottoman sultan Süleymân I conquered the region of Baghdad, where Fuzûlî lived, from the Safavid Empire. Fuzûlî now had the chance to become a court poet under the Ottoman patronage system, and he composed a number of poems in praise of the sultan, and as a result, he was granted a stipend. But he did not really get it. Therefore he citicized bureaucracy in one of his best-known works, the letter Şikâyetnâme (شکايت نامه; "Complaint"):

The loss of his stipend meant that Fuzûlî never became secure. He died during a plague outbreak in 1556, in Karbalā’, either of the plague itself or of cholera. 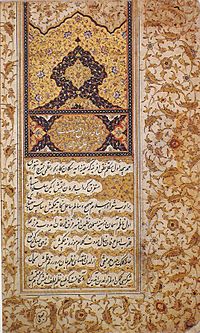 A page from the collected poems of Fuzûlî

All content from Kiddle encyclopedia articles (including the article images and facts) can be freely used under Attribution-ShareAlike license, unless stated otherwise. Cite this article:
Fuzûlî Facts for Kids. Kiddle Encyclopedia.