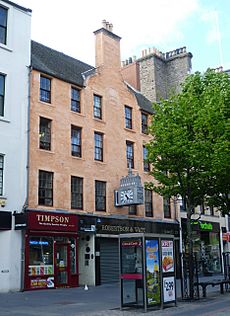 Gardyne's Land is a complex of five historic buildings on the High Street, Dundee, Scotland. They are the oldest domestic buildings in that city.

Gardynes Land consists of a complex of five buildings: a L-plan three-storey merchant's house from around 1560; lodgings from around 1640; a tenement from around 1790; billiard hall from around 1820 and a Victorian retail unit from around 1845. The merchant's house is the only domestic building surviving from the time, when Dundee was Scotland's second largest city. All of the buildings are Category A listed buildings. The buildings came to the attention of the Tayside Building Preservation Trust in 1995, a limited company with charitable status which exists to restore and reuse buildings of architectural or historic interest at risk in Tayside. Between 1997 and 2000, the buildings were acquired by the trust and funds were raised for the project. A first phase of wind and waterproof works commenced in 2000. Between 2000 and 2003, a professional team were appointed and plans were first drawn up and approved for conversion into hostel use. In April 2005, the project was handed over to Dundee City Council. The restoration of Gardyne's Land has received awards from the Dundee Civic Trust, Dundee Institute of Architects, the Royal Town planning institute, a Scottish award for quality in planning and regeneration and renewal magazine.

All content from Kiddle encyclopedia articles (including the article images and facts) can be freely used under Attribution-ShareAlike license, unless stated otherwise. Cite this article:
Gardyne's Land, Dundee Facts for Kids. Kiddle Encyclopedia.