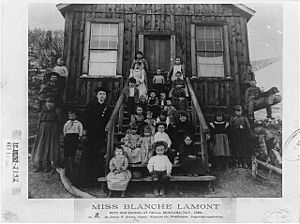 Hecla was a town in Beaverhead County, Montana. It has been designated as a ghost town with only a few ruined buildings remaining. It was notable at one time as the home of Blanche Lamont, who taught at Hecla's one-room schoolhouse. Margaret Brown also lived there for a time.

The Hecla Mining District was "on the side of Lion Mountain. Also referred to as the Glendale and/or Bryant Mining District, which was strung out along ten miles of gulches, the four towns included Trapper City, Lion City, Glendale, and Hecla."

In 1881, the Hecla Company reorganized and came under the direction of Henry Knippenberg. Shortly after he assumed control, Knippenberg had the town of Hecla built a mile away from Lion City ... Transportation from the mine was improved with the construction of a four mile-long, narrow-gauge tramway from Hecla to the mill.

The town of Hecla grew to some 1,500 to 1,800 persons, with a water works system, fire protection, a church, a school for 200 pupils, and other businesses typical of a small mining camp.

The area "was hard hit when the Sherman Silver Purchase Act was repealed in 1893."

"The district can be reached from I-15 near Melrose at Exit 93 on Trapper Creek Road. Glendale is about five miles and Lion City and Hecla, another 7 miles or so. A four wheel drive or ATV is recommended."

All content from Kiddle encyclopedia articles (including the article images and facts) can be freely used under Attribution-ShareAlike license, unless stated otherwise. Cite this article:
Hecla, Montana Facts for Kids. Kiddle Encyclopedia.