Grande-Île is an island in the St. Lawrence River in Quebec, Canada. The island is mostly occupied by the city Salaberry-de-Valleyfield. Part of the Hochelaga Archipelago, the island connects the Beauharnois-Salaberry and the Vaudreuil-Soulanges regions over the Saint Lawrence River via the Pont Monseigneur Langlois. Grande-Île was also the name of a municipality on the island which merged with Salaberry-de-Valleyfield on January 1, 2002. 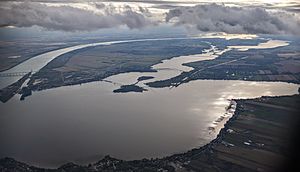 All content from Kiddle encyclopedia articles (including the article images and facts) can be freely used under Attribution-ShareAlike license, unless stated otherwise. Cite this article:
Grande-Île, Quebec Facts for Kids. Kiddle Encyclopedia.