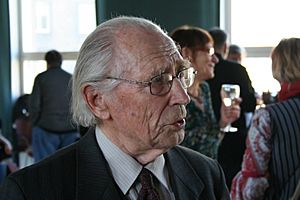 During World War II, he fought in the German army. From 1944 to 1946, he was a prisoner of war at Parakhino in Russia. In 1950, he graduated from Tallinn Teachers' Institute and in 1955 from the Leningrad Pedagogical Institute as a teacher of chemistry and biology. From 1947 to 1978, he taught at Märjamaa Secondary School.

All content from Kiddle encyclopedia articles (including the article images and facts) can be freely used under Attribution-ShareAlike license, unless stated otherwise. Cite this article:
Harri Jõgisalu Facts for Kids. Kiddle Encyclopedia.