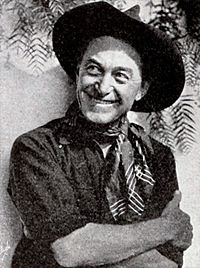 One of his best known roles was as the President of the Senate (Vice President of the United States) in the drama movie Mr. Smith Goes to Washington (1939). He was nominated for the Academy Award for Best Supporting Actor.

He was the father of Harry Carey Jr., who was also an actor. In 1920, he married actress Olive Fuller Golden.

Carey was born in The Bronx. He died of lung cancer and coronary thrombosis caused by a spider bite on September 21, 1947 in Los Angeles, aged 69.

All content from Kiddle encyclopedia articles (including the article images and facts) can be freely used under Attribution-ShareAlike license, unless stated otherwise. Cite this article:
Harry Carey Facts for Kids. Kiddle Encyclopedia.