Heimia salicifolia is a species of flowering plant in the Loosestrife family, Lythraceae. It is native to the Americas, ranging from the southwestern United States (Texas and New Mexico) through Mexico and Central America to Argentina. Common names include shrubby yellowcrest, sinicuichi, sun opener, willow-leaf heimia, sini. The plant has been used for shamanic purposes by native peoples in Central America and Mexico. 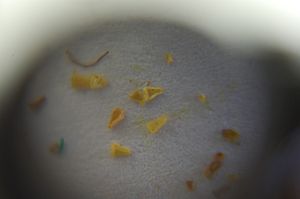 Use of H. salicifolia for shamanic purposes by native peoples of Central America and Mexico has been described. In the method of preparation commonly used, fresh leaves are collected and allowed to wilt. The leaves are put into a cup or jar, cool water is added, and the mixture is placed in the sun to brew and ferment for at least 24 hours. It is said that during the fermentation process, the knowledge of the sun is embedded into the potion, creating the "elixir of the sun."

All content from Kiddle encyclopedia articles (including the article images and facts) can be freely used under Attribution-ShareAlike license, unless stated otherwise. Cite this article:
Heimia salicifolia Facts for Kids. Kiddle Encyclopedia.