I've got your nose facts for kids 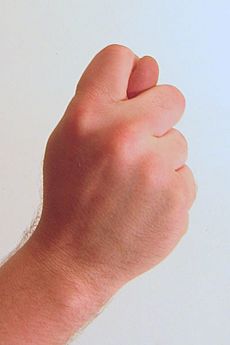 "Got your nose" hand position, with tip of thumb representing the stolen "nose"

I've got your nose is a children's game in which one person pretends to pluck the nose from another's face (usually a child).

The child may chase the nose thief to retrieve their nose or may retaliate by stealing the first person's (or someone else's) nose. The 'nose' may then be replaced by pressing the thumb to the child's nose and withdrawing the hand, showing the child that the taker no longer possesses the child's nose.

This game is commonly played between children, as well as between adults (e.g. parents, grandparents, uncles) and their young relatives. Young children to the age of 2 or 3 often find the game amusing. Cognitively, this is because three-year-olds have trouble recognising that a thing may look like one thing yet be another, whereas four-year-olds are twice as likely to have that ability. The game is an example of teaching pro-social lying or playful deception to children.

This game is found mainly in the English-speaking world, but also exists elsewhere. For instance in France, it is known as 'je t'ai volé/piqué ton nez!' (I stole your nose).

All content from Kiddle encyclopedia articles (including the article images and facts) can be freely used under Attribution-ShareAlike license, unless stated otherwise. Cite this article:
I've got your nose Facts for Kids. Kiddle Encyclopedia.