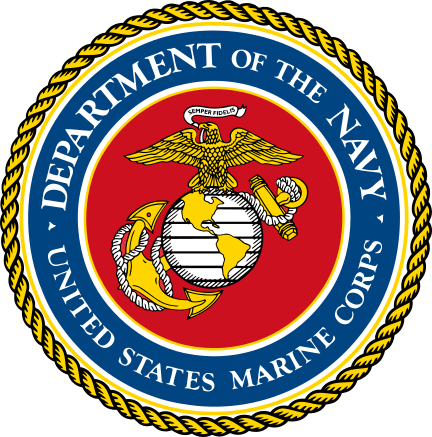 Description: Seal of the United States Marine Corps. It is defined in Executive Order 10538 (alternate source) as: Standing upon the western hemisphere of the terrestrial globe containing the lines of latitude and topographical outlines of North, Central, and South America, an American bald eagle with wings displayed horizontally and inverted holding in his beak a scroll inscribed with the motto SEMPER FIDELIS, all bronze. Behind the western hemisphere a foul anchor bend sinister-wise with stock, arms, and flukes in slight perspective, all bronze, on a scarlet background and within a dark blue band edged in gold circumscribed by a gold rope rim and inscribed DEPARTMENT OF THE NAVY • UNITED STATES MARINE CORPS in gold letters. The central device of the seal is the emblem of the United States Marine Corps. For more information, see here.
Title: Seal of the United States Marine Corps
Credit: DoD website: http://www.defenselink.mil/multimedia/web_graphics/#mc
Author: U.S. Government
Permission: Public domain from a copyright standpoint, but other restrictions apply. No person may, except with the written permission of the Secretary of the Navy, use or imitate the seal, emblem, name, or initials of the United States Marine Corps in connection with any promotion, goods, services, or commercial activity in a manner reasonably tending to suggest that such use is approved, endorsed, or authorized by the Marine Corps or any other component of the Department of Defense. Use of this seal may be related to content found in MCO 5030.3B Unofficial Use of the Seal, Emblem, Names or Initial of the Marine Corps.
Usage Terms: Public domain
License: Public domain
Attribution Required?: No

The following image is a duplicate of this image (more details):

The following 15 pages link to this image: