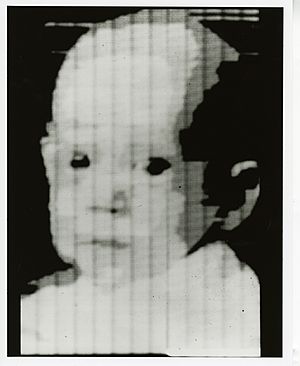 The first image scanner developed for use with a computer was a drum scanner. It was built in 1957 at the US National Bureau of Standards by a team led by Russell A. Kirsch. The first image ever scanned on this machine was a 5 cm square photograph of Kirsch's then-three-month-old son, Walden. The black and white image had a resolution of 176 pixels on a side

In computing or computer, an image scanner is a device used to transfer images or text into a computer. There are special models for scanning photo negatives, or to scan books. In the computer, the signal from the scanner is transferred to a digital image. This image can then be edited, printed, etc. All scanners have special parts which are used to take a picture from an object. Charge-coupled device or Contact Image Sensor parts take the light from the object and change it into a digital signal. The digital signal is then transferred to the computer memory or is read in the scanner's processor. With some software it can be changed to a compressed digital image, like JPEG or PNG. Text written by hand can be changed to ASCII code by an OCR program.It is very important for computer

The main types of scanner

All content from Kiddle encyclopedia articles (including the article images and facts) can be freely used under Attribution-ShareAlike license, unless stated otherwise.