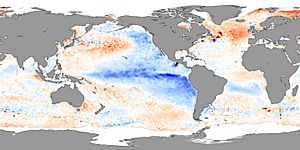 La Niña is a coupled ocean atmosphere phenomenon that is counterpart to El Niño. The name means "little girl" in Spanish. La Niñas are often, though not always, preceded by an El Niño phenomenon. Weather patterns in the United States are usually different than during El Niño years. During La Niñas the Atlantic hurricane season produces more intense storms than normal.

Observations of La Niña events since 1950, show that impacts associated with La Niña events depend on what season it is. However, while certain events and impacts are expected to occur during events, it is not certain or guaranteed that they will occur. 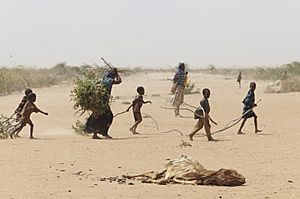 During La Niña years, the formation of tropical cyclones, along with the subtropical ridge position, shifts westward across the western Pacific Ocean, which increases the landfall threat to China. In March 2008, La Niña caused a drop in sea surface temperatures over Southeast Asia by 2 °C. It also caused heavy rains over Malaysia, the Philippines, and Indonesia.

La Niña causes mostly the opposite effects of El Niño, above-average precipitation across the northern Midwest, the northern Rockies, Northern California, and the Pacific Northwest's southern and eastern regions. Meanwhile, precipitation in the southwestern and southeastern states, as well as Southern California, is below average. This also allows for the development of many stronger-than-average hurricanes in the Atlantic and fewer in the Pacific.

The synoptic condition for Tehuantepecer winds is associated with high-pressure system forming in Sierra Madre of Mexico in the wake of an advancing cold front, which causes winds to accelerate through the Isthmus of Tehuantepec. Tehuantepecers primarily occur during the cold season months for the region in the wake of cold fronts, between October and February, with a summer maximum in July caused by the westward extension of the Azores-Bermuda high pressure system. Wind magnitude is weaker during La Niña years than El Niño years, due to the less frequent cold frontal incursions during La Niña winters, with its effects can last from a few hours to six days.

In Canada, La Niña will, in general, cause a cooler, snowier winter, such as the near-record-breaking amounts of snow recorded in La Niña winter of 2007/2008 in Eastern Canada.

All content from Kiddle encyclopedia articles (including the article images and facts) can be freely used under Attribution-ShareAlike license, unless stated otherwise. Cite this article:
La Niña Facts for Kids. Kiddle Encyclopedia.