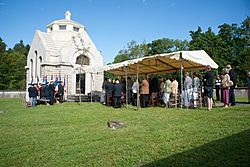 Louvemont-Côte-du-Poivre is a commune. It is in the Meuse department in Grand Est in northeast France.

Nobody has lived here since the end of the Battle of Verdun in 1916. The official population is zero. Nobody lives in these places either: Bezonvaux, Beaumont-en-Verdunois, Haumont-près-Samogneux, Cumières-le-Mort-Homme and Fleury-devant-Douaumont.

During the war, the town was completely destroyed. The land was so badly damaged that it was hard to live there. So, the commune was not rebuilt. The site of the commune is kept as it was to show the violence of war. It is officially named a "village that died for France." A municipal council of three members manages the commune. The council members are appointed by the prefect of the Meuse department.

All content from Kiddle encyclopedia articles (including the article images and facts) can be freely used under Attribution-ShareAlike license, unless stated otherwise. Cite this article:
Louvemont-Côte-du-Poivre Facts for Kids. Kiddle Encyclopedia.