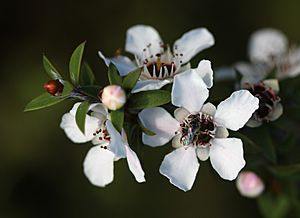 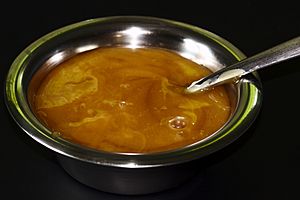 A bowl of mānuka honey

Mānuka honey is a monofloral honey produced from the nectar of the mānuka tree, Leptospermum. There is no conclusive evidence of medicinal or dietary value in using mānuka honey other than as a sweetener. The word mānuka is the Māori name of the tree; the spelling manuka (without a macron) is common in English.

Mānuka honey is produced by European honey bees (Apis mellifera) foraging on the mānuka (Leptospermum scoparium), which evidence suggests originated in Australia before the onset of the Miocene aridity. It grows uncultivated throughout both southeastern Australia and New Zealand.

Mānuka honey is markedly viscous. This property is due to the presence of a protein or colloid and is its main visually defining character, along with its typical dark cream to dark brown colour.

Mānuka honey for export from New Zealand must be independently tested and pass the Mānuka Honey Science Definition test as specified by the Ministry for Primary Industries (MPI), The test comprises five attributes. Four are chemical and one is DNA of Leptospermum scoparium. The honey must pass all five tests to be labeled as mānuka. This testing came into effect on 5 January 2018.

The MPI does not have a definition for mānuka sold in the New Zealand domestic market. The MPI Five attributes test is the only standard recognised by New Zealand legislation.

The Australian Manuka Honey Association (AMHA), has established a set of standards for authentic Australian Manuka honey. Honey that carries the AMHA’s Mark of Authenticity must be pure, natural Manuka honey, produced entirely in Australia, and be tested by an independent, approved laboratory to ensure it meets minimum standards of naturally occurring methylglyoxal (MGO), dihydroxyacetone (DHA), and leptosperin.

The mānuka tree flowers at the same time as Kunzea ericoides, another Myrtaceae species also called kānuka, which often shares the same growing areas. Some apiarists cannot readily differentiate these species, as both flowers have similar morphology and pollen differentiation between the two species is difficult.

Mānuka honey has a strong flavour, characterised as "earthy, oily, herbaceous", and "florid, rich and complex". It is described by the New Zealand honey industry as having a "damp earth, heather, aromatic" aroma and a "mineral, slightly bitter" flavour.

Methylglyoxal, a component of mānuka honey, is under study for its potential activity against E. coli and S. aureus. Mānuka honey does not reduce the risk of infection following treatment for ingrown toenails.

As a result of the high premium paid for mānuka honey, an increasing number of products now labelled as such worldwide are counterfeit or adulterated. According to research by UMFHA, the main trade association of New Zealand mānuka honey producers, whereas 1,700 tons of mānuka honey are made there annually representing almost all the world's production, some 10,000 tons of produce is being sold internationally as mānuka honey, including 1,800 tons in the UK. In governmental agency tests in the UK between 2011 and 2013, a majority of mānuka-labelled honeys sampled lacked the non-peroxide anti-microbial activity of mānuka honey. Likewise, of 73 samples tested by UMFHA in Britain, China and Singapore in 2012–13, 43 tested negative. Separate UMFHA tests in Hong Kong found that 14 out of 56 mānuka honeys sampled had been adulterated with syrup. In 2013, the UK Food Standards Agency asked trading standards authorities to alert mānuka honey vendors to the need for legal compliance. There is a confusing range of systems for rating the strength of mānuka honeys. In one UK chain in 2013, two products were labelled "12+ active" and "30+ total activity" respectively for "naturally occurring peroxide activity" and another "active 12+" in strength for "total phenol activity", yet none of the three were labelled for the strength of the non-peroxide antimicrobial activity specific to mānuka honey.

There have been increasing turf disputes between producers operating close to large mānuka tree clumps, and also cases reported of many hives being variously sabotaged, poisoned, or stolen.

All content from Kiddle encyclopedia articles (including the article images and facts) can be freely used under Attribution-ShareAlike license, unless stated otherwise. Cite this article:
Mānuka honey Facts for Kids. Kiddle Encyclopedia.