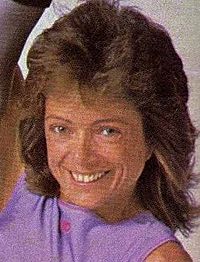 María Amuchástegui (16 January 1953 – 19 July 2017) was an Argentine television fitness instructor, ballerina, and singer. She was born in Buenos Aires. She became well known in Argentina in the 1980s. Her best known morning fitness shows were Buen día Salud and Buen Día, María, both were made in the 1980s. She was also a singer. Her best known work was the 2006 song "Camino de espejos".

Amuchástegui died in Buenos Aires on 19 July 2017 of a stroke and lung cancer at the age of 64.

All content from Kiddle encyclopedia articles (including the article images and facts) can be freely used under Attribution-ShareAlike license, unless stated otherwise. Cite this article:
María Amuchástegui Facts for Kids. Kiddle Encyclopedia.