Matunuck is a village in South Kingstown, Rhode Island, United States near Charlestown, Rhode Island. The village is located on a point along the southern Atlantic coast of Rhode Island off U.S. Route 1. The village takes its name from a Native American word meaning "lookout". The Narragansett tribe made a summer encampment at this location before the land was sold to colonists as part of the Pettaquamscutt purchase. 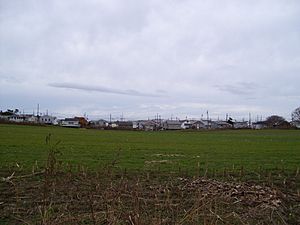 The area is home to several notable beaches including Moonstone Beach, South Kingstown Town Beach at Matunuck, East Matunuck State Beach, and Roy Carpenter's Beach and cottages. The well-known Theatre-by-the-Sea playhouse is also in Matunuck and is listed on the National Register of Historic Places. Also well known Ocean Mist and Tara's Joyce Family Pub are located directly on the beach in Matunuck and are under constant threat of erosion issues.

All content from Kiddle encyclopedia articles (including the article images and facts) can be freely used under Attribution-ShareAlike license, unless stated otherwise. Cite this article:
Matunuck, Rhode Island Facts for Kids. Kiddle Encyclopedia.