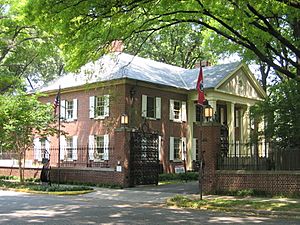 The National Ornamental Metal Museum, now called the Metal Museum, is a museum in Memphis, Tennessee. Founded by artist-blacksmith James Wallace, the museum is devoted to exhibitions of metalwork and public programs featuring metalsmiths.

The Metal Museum is located on a 3.2-acre site overlooking the Mississippi River just south of downtown Memphis. The property, which includes three historic buildings, had been part of a former United States Marine Hospital.

The hospital opened in 1884. The campus then consisted of six buildings – the surgeon’s house, a stable, the executive building, two wards and the nurses’ building. The facility was originally used to treat American Civil War soldiers and to conduct scientific research on yellow fever. Of these six buildings, only the nurses’ building (located on the east side of the 1930s hospital building) and the executive building (the white building that houses the museum's library and permanent collection) survive today. Both building are listed on the National Register of Historic Places.

During the 1930s, several new Works Progress Administration buildings were added to the campus. To make room for the new buildings, the wards and stables were demolished and the executive and the nurses’ buildings, both of which faced the street, were moved three hundred feet to their current locations, on wagons pulled by mules.

After the hospital closed in the mid-1960s, the property was deeded to the City of Memphis through the Heritage and Conservation Act. The Metal Museum obtained a lease for the property in July 1976. Two years later, renovation began on two buildings. On February 5, 1979. the Metal Museum opened to the public

Since 1979, over $2.5 million has gone into developing the Metal Museum property, including construction of the blacksmith shop, the Lawler Foundry and the repairs and restoration lab, the renovation of the library and the installation of a gazebo.

For nearly thirty years, the Metal Museum was led by James Wallace. Under his leadership, the three deteriorating buildings on the site became a residence for artists, a museum and a library. At the end of 2007, after completing the renovation of the third and final building, Wallace retired to focus on his own work. 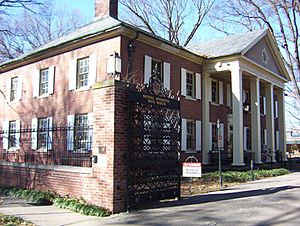 The museum has over 3000 items in its permanent collection, and also hosts travelling exhibitions. There is also a working smithy and foundry on site. In addition to displaying metalwork inside the museum they also offer hands-on classes in the museums workshops.

Every Fall, the Metal Museum holds a Repair Days Weekend. During this event, volunteer metalsmiths from across the country repair virtually any sort of metal object while the public watches.

All content from Kiddle encyclopedia articles (including the article images and facts) can be freely used under Attribution-ShareAlike license, unless stated otherwise. Cite this article:
National Ornamental Metal Museum Facts for Kids. Kiddle Encyclopedia.