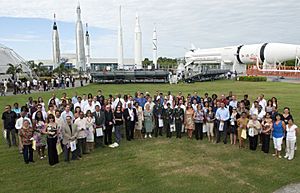 Naturalization is when a person changes his or her nationality. Most people have the nationality of the country where they are born and grow up. If they move to another country they will still keep their own nationality at first, but if they stay there for many years and want to stay there for the rest of their lives they may want to change their nationality. Different countries have different laws about nationalization. Usually the person will have to make a promise in a court of law. He will have to promise to be a good citizen and obey the country's laws.

Sometimes, it is still possible for someone to keep their first nationality as well as getting a new one. This is called "dual nationality". Sometimes children whose parents have different nationalities are allowed to have dual nationality.

Someone who has been naturalized will normally have all the rights that any other person belonging to that country has.

All content from Kiddle encyclopedia articles (including the article images and facts) can be freely used under Attribution-ShareAlike license, unless stated otherwise. Cite this article:
Naturalization Facts for Kids. Kiddle Encyclopedia.