Temporal logic cast aside, Else Ury begins Volume 8 in 1945, but when she mentions the World War she means World War One, not World War Two, which she could not foresee and would not survive. Since the previous volume, 15 years have passed. Annemarie's physician husband Rudolf is now Privy Counsel and Professor. Daughter Vronli, serious, sensible, hard-working and humble, is a maternity nurse in Munich. Brother Hans’ son, a poor student, is about to graduate and does not want to study medicine, contrary to the wishes of his father, but wants to be a farmer like his admired Uncle Klaus. The main character is the youngest daughter, Ursel, seventeen, who has just graduated from school and is very similar to Annemarie. Ursel has a beautiful voice and wants to be a singer, but her father insists that she start as a bank clerk. The difficult situation between father and daughter escalates angrily for a time, but Annemarie smoothes the waves and devises a compromise: Ursel joins the bank, but takes singing lessons from an aging opera diva. Annemarie's brother Klaus is married to Ilse and has four sons, while Marlene and Peter are parents of three daughters. Brother Hans is lonely since the death of his wife Ola, and has two wild sons. Annemarie's girlfriend Margot is his housekeeper and a little later his second wife. Annemarie's mother is widowed and considerably aged by grief. Since her apartment is too big for her and old Hanne, her cook, she takes in travelers, among them two rich Brazilian siblings, Milton and Margarida Tavares, children of a coffee plantation owner. The two meet Ursel and befriend her. Ursel and Milton fall in love, but Ursel fears leaving Germany. Ursel soon feels increasingly uncomfortable at the bank, and has a collision with her supervisor, much to the dismay of her parents. Everything eventually works out when her father’s patient, Music Professor Lange, hears Ursel singing and asks Rudolf Hartenstein to let Ursel attend the Conservatory. When Ursel is allowed to substitute at a major concert for a singer who became ill, she seems to be at the beginning of a great career. Ultimately, she realizes that her love is stronger than her singing voice. She marries Milton Tavares and goes with him to Brazil. Annemarie soldiers on despite her own pain at the separation. Numerous letters home describe Ursel’s new life, and at the end of the story she becomes the mother of twins Anita and Marietta, each named after their grandmother Annemarie.

Nesthäkchen’s Youngest shows substantive similarities with the earlier Der Trotzkopf series. As daughter Ruth is Mother Ilse's copy, Ursel is Annemarie's younger self. Like Ruth Gontrau, Ursel Hartenstein also dreams of a singing career. Even the emigration to America is in Der Trotzkopf. There, Margaret's daughter Marianne is engaged to Fritz, who has become a successful businessman in America, and goes with him to San Francisco. After many years of separation, their American children return to Germany. 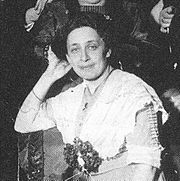 The Nesthäkchen books represent a German literary genre, the Backfischroman, a girls' novel that describes maturation and was intended for readers 12 – 16 years old. A Backfisch (“teenage girl”, literally “fish for frying”) is a young girl between fourteen and seventeen years of age. The Backfischroman was in fashion between 1850 and 1950. It dealt overwhelmingly with stereotypes, traditional social images of growing girls absorbing societal norms. The stories ended in marriage, with the heroine becoming a Hausfrau. Among the most successful Backfischroman authors, beside Else Ury, were Magda Trott, Emmy von Rhoden with her Der Trotzkopf and Henny Koch. Ury intended to end the Nesthäkchen series with volume 6, Nesthäkchen Flies From the Nest, describing Nesthäkchen's marriage. Meidingers Jugendschriften Verlag, her Berlin publisher, was inundated with a flood of letters from Ury's young fans, begging for more Nesthäkchen stories. After some hesitation, Ury wrote four more Nesthäkchen volumes, and included comments about her initial doubts in an epilogue to volume 7, Nesthäkchen and Her Chicks.

Else Ury (November 1, 1877 in Berlin; January 13, 1943 in the Auschwitz concentration camp) was a German writer and children's book author. Her best-known character is the blonde doctor's daughter Annemarie Braun, whose life from childhood to old age is told in the ten volumes of the highly successful Nesthäkchen series. The books, the six-part TV series Nesthäkchen (1983), based on the first three volumes, as well as the new DVD edition (2005) caught the attention of millions of readers and viewers.

All content from Kiddle encyclopedia articles (including the article images and facts) can be freely used under Attribution-ShareAlike license, unless stated otherwise. Cite this article:
Nesthäkchen's Youngest Facts for Kids. Kiddle Encyclopedia.