The species' common name, tupelo, is of Native American origin, coming from the Creek words ito "tree" and opilwa "swamp"; it was in use by the mid-18th century.

While these trees are often known as simply "tupelo", the fuller name, black tupelo, helps distinguish it from the other species of the tupelo genus Nyssa, some of which have overlapping ranges, such as water tupelo (N. aquatica) and swamp tupelo (N. biflora). The name "tupelo" is used primarily in the American South; northward and in Appalachia, the tree is more commonly called the black gum or the sour gum, although no part of the plant is particularly gummy. Both of these names contrast it with a different tree species with a broadly overlapping range, the sweet gum (Liquidambar styraciflua), which does produce an aromatic resin. Another common name used occasionally in the Northeast is pepperidge.

In Appalachia, the frequent variant is Nyssa sylvatica var. caroliniana, which is sometimes called the Yellow Gum. Its leaflets are thinner and less glossy, "with rather long tips, the under surface persistently somewhat downy and covered with minute warty excrescences easily seen under an ordinary hand lens" "Yellow Gum is not a swamp tree, like Black Gum, but an inhabitant of dry land, hills, and the coves of the southern Appalachians which it ascends to 3500 f.

On Martha's Vineyard, in Massachusetts, this species is called "beetlebung", perhaps for its use in making the mallet known as a beetle, used for hammering bungs (stoppers) into barrels. 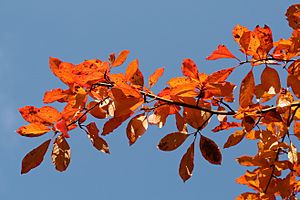 Nyssa sylvatica leaves in the autumn. 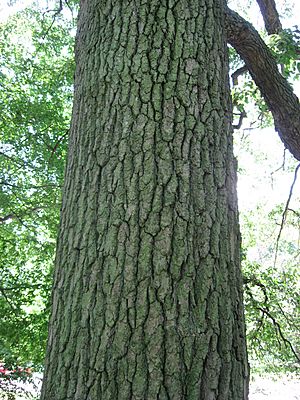 Nyssa sylvatica grows to 20–25 metres (66–82 ft) tall, rarely to 35 metres (115 ft), with a trunk diameter of 50–100 centimetres (20–39 in), rarely up to 170 centimetres (67 in). These trees typically have a straight trunk with the branches extending outward at right angles. The bark is dark gray and flaky when young, but it becomes furrowed with age, resembling alligator hide on very old stems. The twigs of this tree are reddish-brown, usually hidden by a greyish skin. The pith is chambered with greenish partitions.

The leaves of this species are variable in size and shape. They can be oval, elliptical, or obovate, and 5–12 cm (2–4.5 in) long. They have lustrous upper surfaces, with entire, often wavy margins. The foliage turns purple in autumn, eventually becoming an intense bright scarlet. Deer are extremely fond of the leaves on seedlings and saplings, to the point where large populations of them can make establishment of the tree almost impossible. For comparison, mature trees are largely left alone.

The flowers are very small, in greenish-white in clusters at the top of a long stalk and a rich source or nectar for bees. They are often dioecious so a male and female tree in proximity is required to set seed, however, many trees are also polygamo-dioecious, which means they have both male and female flowers on the same tree. The fruit is a black-blue, ovoid stone fruit, about 10 mm long with a thin, oily, bitter-to-sour tasting flesh and very popular with small bird species. There are from one to three fruits together on a long slender stalk. They are a valuable energy food for birds, especially the American robin.

Nyssa sylvatica forms a large deep taproot when young that makes transplanting difficult. Because of this, it is fairly uncommon in cultivation and the nursery trade.

Nyssa sylvatica grows in various uplands and in alluvial stream bottoms from southwestern Maine and New York, to extreme southern Ontario, central Michigan, Illinois, and central Missouri, south to southern Florida, eastern Texas, and eastern Oklahoma. It also occurs locally in central and southern Mexico. Optimum development is made on lower slopes and terraces in the Southeastern United States.

Nyssa sylvatica is found in a variety of upland and wetland habitats in its extensive range. Its flowers are an important source of honey and its fruits are important to many birds and mammals. Hollow trunks provide nesting or denning opportunities for bees and various mammals. It is the longest living non-clonal flowering plant in Eastern North America, capable of obtaining ages of over 650 years.

Nyssa sylvatica is found in a wide range of climates, due to its extensive distribution. It commonly grows in both the creek bottoms of the southern coastal plains, to altitudes of about 900 meters (3,000 feet) in the Southern Appalachians. These trees grow best on well-drained, light-textured soils on the low ridges of second bottoms and on the high flats of silty alluvium. In the uplands it grows best on the loams and clay loams of lower slopes and coves.

The species occurs 35 different forest cover types. When found on drier upper slopes and ridges, it is seldom of log size or quality. 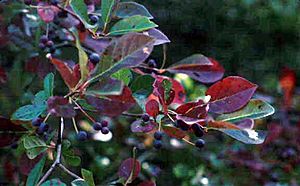 The limbs of these trees often deteriorate early, and the decayed holes make excellent dens for squirrels, raccoons, Virginia opossums, as well as nesting sites for honeybees. 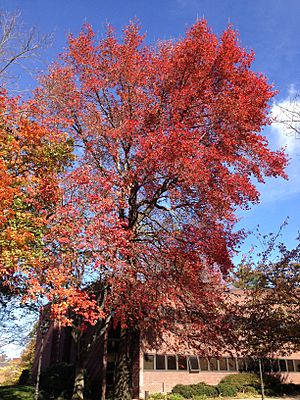 Nyssa sylvatica is cultivated as an ornamental tree in parks and large gardens, where it is often used as a specimen or shade tree. The tree is best when grown in sheltered but not crowded positions, developing a pyramidal shape in youth, and spreading with age. The stem rises to the summit of the tree in one tapering unbroken shaft, the branches come out at right angles to the trunk and either extend horizontally or droop a little, making a long-narrow, cone-like head.

The leaves are short-petioled and so have little individual motion, but the branches sway as a whole. The spray is fine and abundant and lies horizontally so that the foliage arrangement is not unlike that of the beech (Fagus). Its often spectacular autumnal coloring, with intense reds to purples, is highly valued in landscape settings. It is claimed to be the most fiery and brilliant of the 'brilliant group' that includes maple, dogwood, sassafras, and sweet gum, as well as various species of tupelo.

In the UK the cultivar 'Wisley Bonfire' has gained the Royal Horticultural Society's Award of Garden Merit.

Nyssa sylvatica is a major source of wild honey in many areas within its range. Hollow sections of black gum trunks were formerly used as bee gums by beekeepers.

The wood of Nyssa sylvatica is heavy, hard, cross-grained, and difficult to split, especially after drying. This resistance to splitting led to its use for making mauls, pulleys, wheel hubs, agricultural rollers, bowls, and paving blocks. The wood is also used for pallets, rough floors, pulpwood, and firewood. Since the wood is very tough, resistant to wear, it has been used for shuttles in weaving. Because it is resistant to wear and very readily accepts creosote-based preservatives it is considered to be a premier wood for making railroad ties. The wood's resistance to wear and some acids has led to its use as factory flooring.

It was also used traditionally by Native Americans as a teeth-cleaning twig. It also was used for dipping snuff.

All content from Kiddle encyclopedia articles (including the article images and facts) can be freely used under Attribution-ShareAlike license, unless stated otherwise. Cite this article:
Nyssa sylvatica Facts for Kids. Kiddle Encyclopedia.