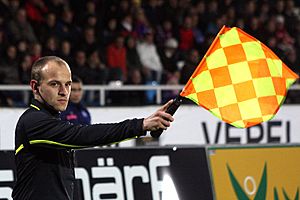 The offside rule is one of the oldest football rules, but is still a much discussed rule. This is because it is difficult for the referee or assistant referee to watch the ball, the player playing the ball and also the attacker who are seeking to receive the ball at the same time.

Offside is an offence committed by the team which has the ball and is punished with an indirect free kick. It is a common misconception that the ball must be played forward for an offside offence to be committed. This is incorrect however, as an offside offence is related to the position of the ball and the player receiving it rather than the direction it is played. If the player is in front of the ball when it is played and has not got at least two defending players closer to the defending goal line than they are, she or he is in an offside position.

But there are some exceptions:

All content from Kiddle encyclopedia articles (including the article images and facts) can be freely used under Attribution-ShareAlike license, unless stated otherwise. Cite this article:
Offside rule Facts for Kids. Kiddle Encyclopedia.