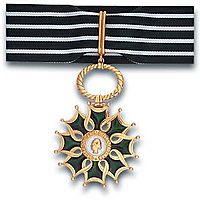 The Ordre des Arts et des Lettres (Order of Arts and Letters) is an order of France created on 2 May 1957 by the Minister of Culture. Its status to the Ordre national du Mérite was confirmed by President Charles de Gaulle in 1963.

The Order has three grades:

All content from Kiddle encyclopedia articles (including the article images and facts) can be freely used under Attribution-ShareAlike license, unless stated otherwise. Cite this article:
Ordre des Arts et des Lettres Facts for Kids. Kiddle Encyclopedia.