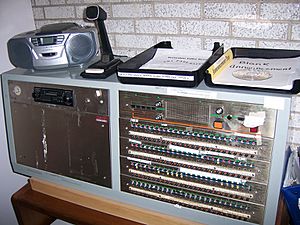 A public address system, commonly known as a PA system, is a network of sound devices that can play sound to several people. They are often used to make announcements in large buildings or neighbourhoods. In big spaces outdoors, amplifiers and loudspeakers have to be very loud. Otherwice the volume would be too small to be heard by everybody.

All content from Kiddle encyclopedia articles (including the article images and facts) can be freely used under Attribution-ShareAlike license, unless stated otherwise. Cite this article:
Public address system Facts for Kids. Kiddle Encyclopedia.