The giant dragonfly occurs along the east coast of NSW from the Victorian border to northern NSW, and is not found west of the Great Dividing Range. There are known occurrences in the Blue Mountains and Southern Highlands, in the Clarence River catchment, and on a few coastal swamps from north of Grafton to Nadgee in the south. It is unusual not only in size, but also in having predominantly terrestrial habits at the larval stage. The giant dragonfly is listed as endangered under the NSW Threatened Species Conservation Act.

Petalura gigantea is a species of dragonfly in the family Petaluridae. 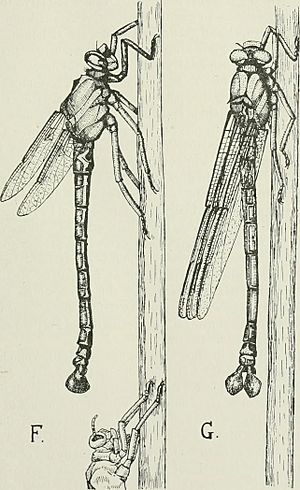 All content from Kiddle encyclopedia articles (including the article images and facts) can be freely used under Attribution-ShareAlike license, unless stated otherwise. Cite this article:
Petalura gigantea Facts for Kids. Kiddle Encyclopedia.